Whose Side is Diane Hunter On?

Madison Payne entered ACW as one of the new class of catfighters and the one with the least experience, but she made up for her lack of skill with an exuberance that has made her a favorite within the promotion. As she set to meet Mandy Taylor, she focused on staying out of submission holds and was wary of Mandy’s kicking ability, What she hadn’t prepared for, however, was Mandy, the woman of a thousand possible personalities and fighting styles.
Mandy began the match by lunging towards her opponent. Madison scrambled to get away and Mandy grabbed Madison around the neck, pulling her head forth , smashing her face into her natural breasts. Madison was immediately in a panic, frightened that Mandy was quickly maneuvering her into a submission predicament and with all of her might she broke away and rolled off of the bed.

Mandy laughed at Madison rookie fear but Madison was clearly uncertain. Mandy pounced on her, locking her thighs around the rookies midsection. She interlocked her legs around Payne’s thigh, shifting her weight, causing the younger girl to how in pain. “Are you going to quit, little girl?” Taylor beckoned. Madison screamed in reply. Taylor, laughing, released her hold. “Come on… Get some more.” Madison, instead, ran to head down the stairs.

Mandy, again laughing, grabbed Payne by the hair and dragged her back onto the bed. She again repositioned herself, crushing Madison again with her legs. This time, however, Madison wasn’t afraid, but instead in pain and angry.

Madison began to fight back, slapping and kicking and screaming at the top of her lungs. Mandy remained calm but realized that her opponent would likely not be a pushover. As if to acknowledge her opponents apprehension, Payne grabbed a nearby phone and swung it at Mandy’s head.. Mandy gathered the phone cord, binding Madison’s hands downward and wrapped the other end around the rookies throat.

Mandy began berating her as Madison squirmed to get the cord from around her neck. As Mandy unwound the cord, Madison fell in a heap, gasping for air.

Madison began to whimper. “Please stop,” she begged. Mandy laughed and readied to ridicule her again when Madison smiled and whirled to her left, ending up behind her opponent and wrapped her arm around Mandy’s throat. As she locked in her chokehold, she saw the look of fear in Mandy’s eyes. “Yeah,” Madison growled. “Yeah bitch, I set you up. Now tap or I’ll choke you!” Mandy, unsure what was happening, quickly tapped out.

It was a dramatic victory for Madison Payne, a clear announcement that she was not to be taken lightly ad would give as much as she got. More than anything else, it showed her that she was ready for ACW.

The full, unedited photoset for this match is available here.

Next Alex Del Monacco is the New Champ

The Best of Championship Matches Released

The Great 8 – New Challengers in ACW

The Crash and Burn of Dixie Monroe

Back
Widgets on side panel

Are you 21 or older? Welcome to ApartmentWrestlers.com This website requires you to be 21 years of age or older. Please verify your age to view the content by clicking on the button on the left, or click "Exit" to leave. 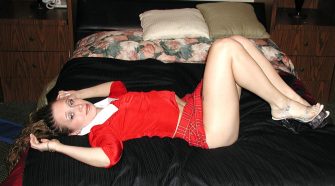